Below is the interview Chuck gave, only a few weeks before he passed away. 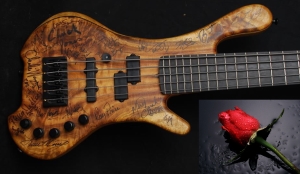 Thank you for everything you did for us, Chuck!

I am very fortunate to play in a diverse number of bands ranging from country with Jesse Keith Whitley and Eric Lee Beddingfield – who was awarded “Indie artist of the year” 2011-12 – to world reknown heavy metal band Medieval Steel. I am currently putting together my dream rock band that will be called Acropolis. I’m very excited about playing with this group of musicians.

How did you end up as a bass player?

From the time I was in grade school, I loved Kiss, Rush and Led Zepplin. Gene Simmons, Geddy Lee and John Paul Jones were the reasons I wanted to be a bass player. I thought they were the coolest guys on the planet. *lol* I felt the bass guitar was the most powerful instrument on the stage. Still do!!! *lol*

You know how to get to Carnegie hall? Practice!!!! 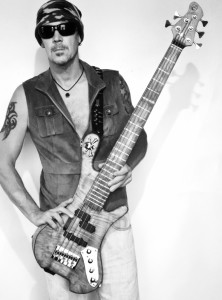 Tell us a little about your current band and projects!

I just finished a new album with heavy metal band Medieval Steel. We have been back and forth to Europe in 2013 in support of that record. It will be released on vinyl LP Feb. 28th on Empire records.

Do you compose music yourself? What do you think the bassist’s most important contribution to the band is?

I do write for the bands I play in. A bass players major objective is to lock with the drummer and create the foundation of the songs.

You were involved with Tom’s Charity bass projects, can you tell us about them?

Yes, Tom has twice built basses based on my specifications, and sent them to me. I then toured with it for a year. I gathered signatures from the artists I played for and toured with. At the end of the year I returned the bass to Tom and it was auctioned with proceeds donated to Ronald McDonald House. The 2012 Clement Charity Bass raised $14,300! It’s the charity’s highest selling auctioned item in it’s history! That’s a win-win!

Can you tell us about your gear?

I have been playing Clement basses a lot over the last years! *lol* As all other of my basses, I string them with Curt Mangan stainless steel strings.I run the bass through different amps in combination. I use Ampeg, Hartke and Trace-Elliot, both cabinets and heads. In my pedal board I have chromatic tuner, compression, overdrive, chorus and flanger. I use tour grade Lucid Audio custom built cables. In my rack I have Sennheisser wireless, Furman power conditioner, and a 27 band Rane GE27 eq.

You just received your own custom Clement bass! What’s the story on that?

Since I was going to tour with the Charity basses, Tom built them according to my specifications. I need so much diversity in my sound depending on who I’m playing for, and Tom nailed it perfectly with the Charity Basses! After sending back the second Charity bass, I commissioned a new bass from Tom for myself. We decided on a limba body and neck with myrtle top and diamondwood fret board. It’s loaded with Bartolini pickups and an amazing preamp by Audere, which comes prewired on that Jazz control plate that’s on the front of the bass. I can get the sound of a P bass to the edgy sound of a Music Man Stingray. Tom sets the action on the neck where it plays totally effortlessly with speed and true intonation!!

Did the bass live up to your expectations?

The bass exceeded my wildest dreams. I use to play a variety of basses for live perfomance but now I only need one: My Clement bass! 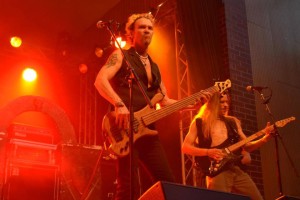